Pesticide Action Network UK (PAN UK) has surveyed and ranked the ten supermarkets with the largest share of grocery sales against eight criteria related to pesticides, including what support they provide to their suppliers to use non-chemical alternatives. Here are their results... 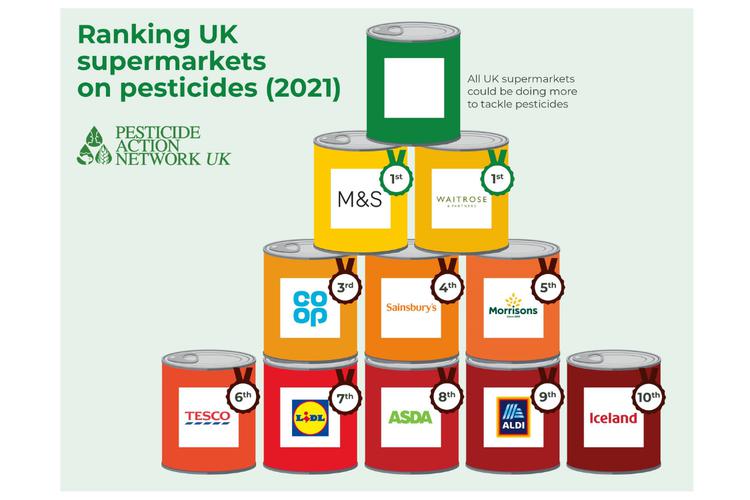 This week PAN UK released their supermarket rankings which revealed that highly toxic pesticides are being used within the supply chains of all of the UK's largest ten supermarkets. These include chemicals that are carcinogens and hormone disruptors, as well as bee-toxins and water contaminants shown to harm aquatic species.

Waitrose and Sainsburys led the table in the organic section, with both supermarkets scoring 'Outstanding'.

"As a sector, supermarkets have made progress in reducing pesticide-related harms over the past two years but there is still a long way to go. Due to the global environmental crisis, more and more people are thinking about how their eating habits are impacting nature. Customers want to be sure they aren’t driving serious health or environmental problems in the UK or beyond, and are increasingly deciding where to shop based on these type of concerns."

The findings highlighted the following concerns:

• UK supermarkets are not doing enough to protect bees and pollinators. While most have placed some kind of restrictions on the use of bee-toxic neonicotinoids (which have played a role in the global collapse of bee populations and have therefore been banned in the UK since 2018), they are still used in the supply chains of all ten of the UK’s largest supermarkets.

• Highly Hazardous Pesticides (a concept which originates from the UN) continue to be used in all UK supermarket supply chains. The list includes pesticides which are acutely toxic and can therefore cause serious harms to farmers and workers after just a single instance of exposure. It also includes pesticides which have been linked to a range of chronic diseases including cancer, birth defects and developmental disorders.

• While all supermarkets conduct residue testing on food items to check that pesticide levels don’t exceed legal limits, only two supermarkets have recently started publishing this information in detail (M&S and Co-op). Customers of the other eight supermarkets have no way of finding out which specific food items contain the most residues, making it impossible for them to make shopping decisions aimed at avoiding pesticides in their diets (other than choosing organic).

• Six of the top ten supermarkets (Asda, Aldi, Lidl, Morrisons, Sainsbury’s and Tesco) continue to sell high-risk pesticide products (such as weedkillers), providing little or no information to customers beyond what is on the label on the potential risks to human health and the environment, or how best to avoid them. The list excludes Iceland and M&S which don’t have gardening ranges. Co-op and Waitrose both took the hugely positive step of announcing an end to their sale of pesticides in 2021.

• In general, the higher-end supermarkets are doing more to reduce pesticide-related harms linked to their global supply chains. As a result, shoppers concerned about pesticides who are on lower incomes are often left with little choice but to shop at supermarkets with weaker standards.

Read their full report on the PAN UK website.