At Eastbrook Farm, home of Helen Browning’s Organic, all the staff have vital roles in maintaining what the brand stands for today. We spoke to a few staff about what they do and why they love working here. 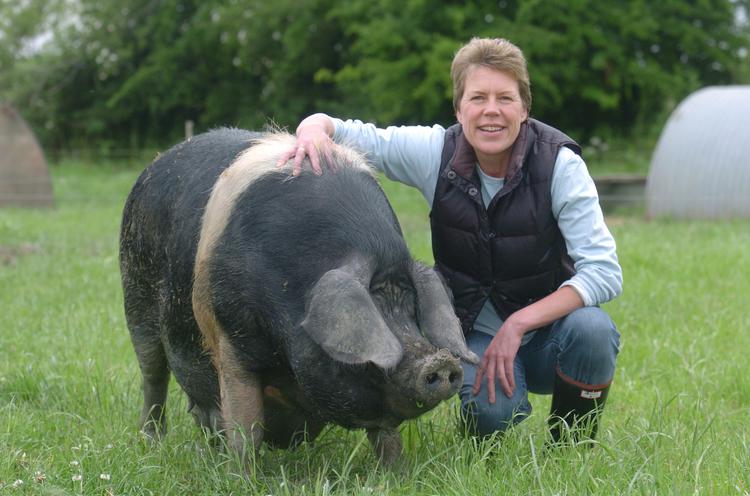 Helen was born and raised on the farm which she runs today and is also Chief Executive of the Soil Association. She remains first and foremost a farmer and was awarded the OBE in 1998 for services to farming. Her mission is to seek ways to farm that are as good as they possibly can be for people, farm animals and nature. As Chief Executive of the Soil Association, the educational charity that supports policy makers, farmers, foresters and citizens make better decisions about how we eat, farm and care for the natural world, Helen tries to ‘walk the talk’ at Eastbrook.

Clive started working at Eastbrook part- time in 2004 and has since become a vital member of the team. He loves birds of prey and is an expert on the numerous species that have made the farm their home – his raptor talks are a popular addition to farm tours.

In an ideal world he would spend most of his time planting hedges and making habitats but needs to keep an eye on pigs and young stock and keep repairs on track…a never-ending task!

Clive loves Eastbrook because he can come to work with a plan but the animals have their own ideas, so days are never the same and certainly never boring. Even when plans do go as hoped he enjoys the variation and mixture of tasks. 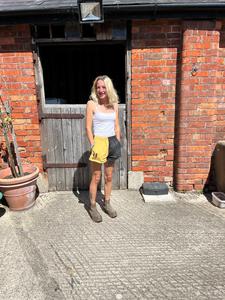 Lily works on the farm, with daily duties to keep the livestock in the right place at the right time.

Lily enjoys working at Eastbrook because she gets to be with the cows, her favourite animal! She also likes the relaxed atmosphere created by her colleagues, and keeping busy.

Image on the left: Lily 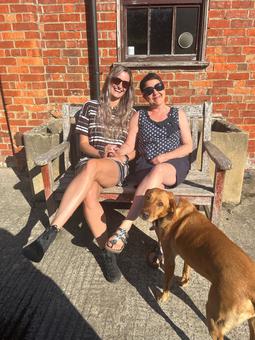 Sue and Cara work in the farm office. Sue joined as farm secretary in 2013, left in 2020 but came back a year later as she missed us so much! Sue’s unique skill is keeping the farm office ticking along smoothly whether it is wages, movement licenses, livestock records or health and safety. Sue loves Eastbrook, and couldn’t stay away – for the team, the animals and Helen. She mostly loves the quirky atmosphere; no two days are ever the same!

Cara’s been at Eastbrook for 2 years as an account assistant, for the farm, pub and our meat company. She loves her job because she gets to see all aspects of the farm.

Cara also never misses the opportunity to visit the animals during her lunch break!

And not forgetting Hettie, who is a regular staff member in the office, with tasting privileges on all meat samples!

Image above: Sue and Cara 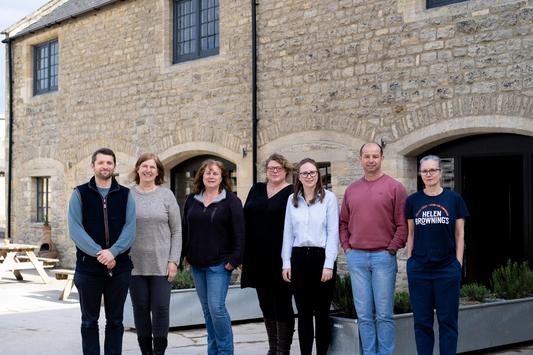 Vicky is the Managing Director at Eastbrook Farm Organic Meats, overseeing the part of the business that sells our meat to customers and consumers and ensures value is added to the produce that the farm produces.

Vicky’s been at Eastbrook for 8 years – after searching on google for ‘jobs with organic companies’. The fundamentals for organic production are important to her and the diversity of the organisation and the ability to get involved in everything means that no two days are the same. Vicky could be visiting farms or processing factories, sampling bacon or the new gin, wine tasting for the pub, buying beds for the hotel or trying to be creative with the marketing team and she loves the fact that the team is small and generally everyone’s voice is heard. Working for and learning from Helen has been pretty inspirational for her too.

Jonny is Finance Manager with responsibility principally for the meat business and the pub while helping a little with the farm too. He produces period end management accounts to assess how the businesses are performing, looking at margins on products, customer profitability, trends and areas for improvements as well as manages cashflow. He enjoys the variety that working at Eastbrook brings. There’s always something going on, whether it be new products being developed by the meat business or new ventures being thought up at the pub – the various businesses are never standing still. The sampling of new products is always a bonus and being able to bring Hettie to work and having the freedom to explore what is going on in the fields around the farm every day is great for him too.

Find out more on www.helenbrowningsorganic.co.uk